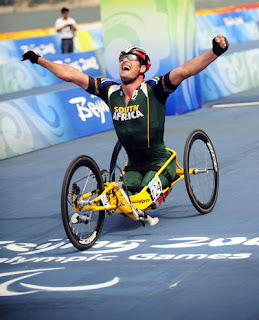 Going for gold in 2012
By Anelle Hamilton


With a list of achievements as long as the marathons he races in, Ernst van Dyk is not only a green-and-gold champion, but also South Africa’s overall golden boy. Born, raised and still residing in the Western Cape with his family, congenital birth defects didn’t deter this inspiring athlete. On the contrary, Ernst’s determination has won him the Boston Marathon nine times. This year he is excited to represent South Africa at the Olympic Games in London where he aims to bring home the gold medal. Our champion shared a few golden tips at
our recent SalesGuru events between 8 - 10 February in Johannesburg, Durban and Cape Town and we share this with our readers to inspire you to go for gold in 2012. Dream big!
Ernst was born in 1973 with congenital birth defects and the doctor who delivered him advised his parent to institutionalise him. However, his parents took him home and later noticed his affinity for sports. He excelled in several sports and while paging through US magazines he started dreaming about competing in the Paralympic Games.
Adapt to changeHe believes being successful is largely dependent on how well we adapt to change. “After finishing school I wanted to study engineering at the University of Stellenbosch and had to find a bursary. I failed my physical test and I was crushed,” says Ernst.
He then decided to enrol for a B. Com degree. Only two weeks later his mom phoned him to tell him that his father had passed away. However, his grief inspired him to follow his true passion and he enrolled to study Sport Science. Regardless of his years as an elite competitor, Ernst says his biggest accomplishment was getting his university degree, making him the first disabled person to graduate with a degree in Sport Science from the University of Stellenbosch.
In 1996 Ernst competed in the Paralympics in Atlanta and even though he did his best conditions were tough and he didn’t medal. His sponsor cancelled their contract and his world collapsed. “I thought my life was over. I had to pick myself up again and decided that one small setback can’t end my career so I started training again and used the disappointment to fuel the flame of victory inside.”
Setbacks
We have to accept that things will go wrong in our lives. “I have lost races, lost sponsors and in the 2000 Paralympics in Sydney an Australian competitor crashed into me which cost me the gold medal.” However, these setbacks only inspired him to do better next time. “Every time a muscle breaks it grows back stronger.”
Road to success“I have always measured success by the amount of sponsorships you have. Despite winning several awards and sponsors early in my sports career I could not find a sponsor for five years and this was discouraging.”
In the 2001 Boston Marathon road races his luck changed though and a dense cloud of fog moved in behind the wheelchair racers which meant that the TV cameras could not film the runners but only focused on the wheelchair athletes. “I was in exceptional shape and won the race by six minutes. This made headline news everywhere and I grabbed the attention of a big corporate which quickly came on board,” he adds.
Top tips for success
It is in the detailPay attention to every little detail. Before Ernst takes part in any race he analyses EVERYTHING. The track, the weather, his competitors and he even works with the engineer who builds his wheelchair.
A balancing actWhen not training or competing Ernst is a family man and loves to spend time with his wife and daughter, his pets and Khoi fish.“Reinforce and focus on the positives in your life as it helps you to build character,” he adds.
Set goalsAlways have a purpose. This will help you focus and become disciplined.
BounceThings will go wrong but don’t get stuck in one place. Bounce back as quickly as you can.
Spread your energyDon’t try too hard. Sometimes it is better to give than too receive. And remember the African saying: darkness comes too soon for the hunted. Live in peace with everyone and live your life without regrets.
SG Fast facts with Ernst
Aspires to win the Boston Marathon 10 times!
Posted by SALESGURU your ultimate Sales Resouce at 05:30 No comments: